From Rail To Ramble: A Walk From Every Station 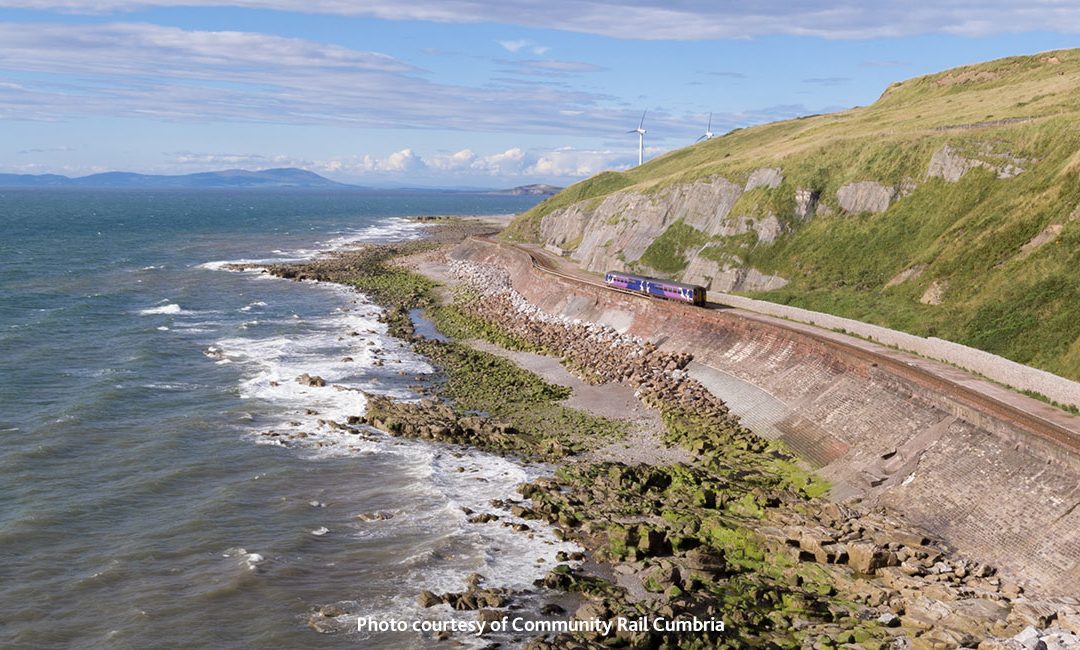 Of course, when it comes to walking, the options and routes are endless. But, here’s some suggestions to get you started, from rail to ramble.

Just a short ride from Foxfield station and across the border into Copeland from the south is Green Road station, from where passengers can alight the train and enjoy beautiful views right across the Duddon valley, estuary and the Lake District fells. Suitable for those who would prefer to take a short, easy stroll, Green Road station is only one mile away from The Green village, where food and drink is available from ‘The Punch Bowl Inn. Although not staffed, the station is a pleasant stop-off point, with shelters for travellers who may be caught in a fresh Cumbrian shower. The station features step-free access to both platforms, thanks to the use of ramps, making it accessible for wheelchair users too. Also accessible thanks to a nearby footpath is Arnaby Moss, part of the Duddon Special Area of Conservation. Popular with people who enjoy peace and quiet, it’s also home to many species of bird. Be quiet and vigilant and you’ll see everything from Pintails, Redknots and Redshanks, to common garden birds too.

Millom is one of Cumbria’s best-kept secrets. Another town on the Duddon Estuary, offering easy access to large areas of salt marshes and sandy beaches, the town is positioned under the watchful eye of Black Combe. Its 2,000 foot high summit rewards walkers with panoramic views across Cumbria and as far as the Isle of Man, Scotland, Ireland and Wales. To reach it, just follow the footpath from the southern end of Whicham Valley.
If you don’t fancy walking quite that far, a full day can be enjoyed in the town itself, thanks to attractions like the Millom Discovery Centre, which couldn’t be any more convenient, being based at the town’s railway station itself. The Discovery Centre’s jewel in the crown is a detailed model railway, providing a fascinating illustrated history of the town’s iron ore industry.

Further afield, a half-hour walk will lead you to the Hodbarrow Nature Reserve. Something of a birdwatcher’s paradise, there’s a fabulous viewing hide overlooking what is the region’s biggest coastal lagoon.

If more wide open space is just the thing, Silecroft will certainly tick many boxes. With Black Combe continuing to loom above you, there is plenty of space to enjoy thanks to this long stretch of peaceful beach. Whether you fancy a coastal stroll, horse-riding with Cumbrian Heavy Horses, or even a spot of waterskiing, you can while-away many hours here. Arriving by rail makes it so easy; and on-hand toilet facilities make it even more convenient, too!

There’s an old saying… The bigger, the better. Well, we disagree! Bootle is the smallest market town in England, with the kind of charm long-since forgotten by many popular visitor destinations. As with every destination on this list, the town’s railway station make it easy to get to, with plenty of market stalls to be enjoyed. On non-market days, Bootle station makes it easy for visitors to access the coastline for a lovely seaside stroll, while Bootle Fell will whet the appetite for those who quite fancy a view from somewhere a little higher – a highlight of which, is the ancient Swinside stone circle. Bootle is also a great place to begin your investigations into Cumbria’s rich Roman history, with many Roman artefacts discovered in the area. Visit the Norman Church of St Michael and marvel at its stunning stained glass windows, before continuing your ramble along the coastal railway line towards the National Park’s only coastal town…

A former Roman port and fishing town, Ravenglass is a stunning coastal village, perhaps now best-known as the home of the legendary Ravenglass and Eskdale Railway: A former working narrow-gauge railway-turned visitor attraction. This 1.5 hour return journey to Dalegarth, close to the base of England’s highest mountain, Scafell Pike, covers a stunning 14 miles during the complete trip through the Eskdale hills. With no need to pack a picnic, refreshments are available at both ends of the line. Perhaps equally famous is the iconic Muncaster Castle, owned by the Frost-Pennington family. A favourite with national and international visitors, it’s thought the castle is among the most-haunted in England! The Hawk and Owl centre adds even further to a day (or weekend) trip well worth taking. 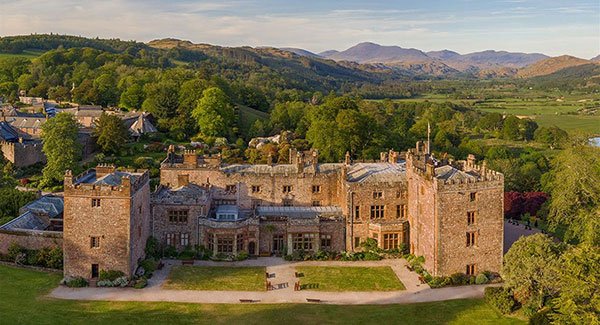 Blink and you’ll miss it, is the key message for visitors planning on getting off the train at Drigg! This quiet little stop-off point is so peaceful, passengers have to ask the guard to make sure the train stops here, as it’s by-request only. Having taken that advice, you’ll find it’s just a short stroll of around one mile down to the beach – where golden sand awaits. There are sand dunes to explore here, but tread carefully and leave the area exactly how you find it – this is a Site of Special Scientific Interest! With a peaceful nature reserve also nearby, you’ll find this day-out may very well be one of the quietest Cumbrian experiences of your life. Grab a snack at the station tearoom or something more substantial at the Victoria Hotel, before taking the train – or even walking along the coast, to the next destination on our list…

Another station offering easy access to more sandy beaches, Seascale is well worth a look, thanks to its low level cliffs – perhaps a taste of things to come, which you can see a little further up the line at St Bees – but more on that, later. For now, have a wander along Seascale’s old wooden jetty or let the children enjoy the nearby play area. Much like Silecroft, there’s plenty of fun to be had here, with wind surfing, more water skiing, an 18 hole golf course and even a biking centre. Reflect on the area’s legendary historical significance thanks to a series of stone circles at Gretigate, thought to date back as far as the Bronze Age! Seascale boasts a rich Viking heritage, while Gosforth is a good walk from here – and area also popular with fell-runners.

The Viking heritage continues to make itself known at Braystones, and it’s neighbouring village of Beckermet. A good route for a walk, this larger village is around a two mile walk from the railway station with ample opportunities for refreshment upon arrival. Here, more history is waiting to be discovered thanks to the Norman and Saxons. In fact, this is the site of two Norman defences and the spectacular ruins of Calder Abbey.

For those who enjoyed the peace and tranquillity on offer at the request stop of Drigg, there’s more to be had at Nethertown, on the Cumbria Coastal Way. This provides walkers with a great place to start a stroll towards St Bees, with stunning clifftop views.

Take the train to St Bees station and follow your nose to the beach. There, you’ll be greeted by dramatic cliffs stretching for four miles along the highest and most westerly point of England. Made up of vast slabs of red sandstone laid down 240 million years ago, this is the source of St Bees’ sandstone – the red stone used for many buildings in Cumbria. At almost 100 metres high in places, the cliffs are topped with grassland and patches of wild gorse, which also provide havens for a wide variety of small birds. Keep cameras and binoculars on standby for the Peregrine falcons that often hunt along the coast and can sometimes be seen flying overhead or perched on the cliff face. The area is a RSPB nature reserve and provides nesting sites for more than 5,000 pairs of seabirds. It’s also famously home to England’s only colony of Black Guillemots. Access to the reserve is via the path over the metal footbridge at the north end of the promenade. 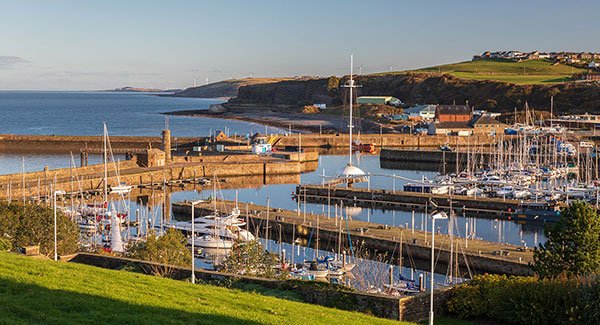 Don’t be tempted to get off the train at Corkickle station, as this stop serves a suburb of Whitehaven only. Instead, stay on until you get to Whitehaven itself, which at one time was one of England’s most bustling ports. Let your imagination run wild here, by paying a visit to the town’s harbour and The Beacon Museum. Tales of Vikings and Victorians accompany a host of seafaring artefacts here, with numerous exhibitions being held all-year-round. Whitehaven’s maritime story also includes the creation of 1785 Jefferson’s rum, with more stories to be told at the town’s Rum Story attraction, delving deeper into Cumbria’s connections to the rum and spice trade.

The final station before the edge of the Copeland border, Parton offers further easy access to opportunities to explore the beach and head off on further fascinating walks. Another location along the Lake District Coast with Roman roots, Parton was used to serve a nearby fort. Residents are also quick to point out that for stunning views of the sun going down at the end of the day, there’s no better view than the one on offer here. 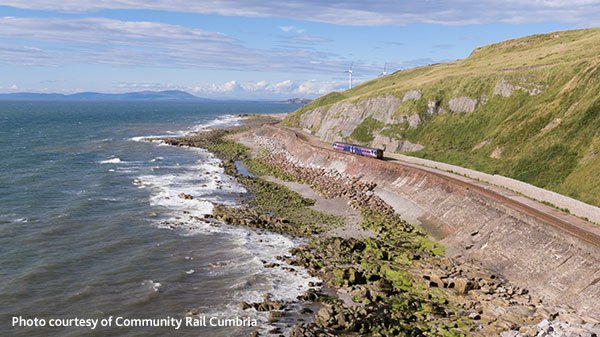 There are a further five coastal railway stations to explore the Lake District Coast from, one south of the Copeland border, and four more to the north, before the railway line moves inwards through North Cumbria towards the city of Carlisle.

Foxfield – the gateway to Copeland:

Just south of the Copeland district border, a ride to Foxfield station offers people a great chance to enjoy a pleasant stroll along the Cumbrian coast, taking in beautiful views of Duddon Sands and the Duddon Estuary. After leaving the train, turn right out of the station and walk along the A595 for a short distance until you see a level crossing on the right hand side. Taking care and obeying safety signals, cross the tracks and follow the road for a minute or two, before strolling down the second turning on the right; a grassy / pebbly track which will lead you towards the coastline. After a short walk, you can pass through an opening and find yourself greeted by views towards the Irish Sea, with the Copeland district to your right and Furness to your left. The estuary is a Site of Special Scientific Interest, flanked by Sandscale Haws, North Walney, Hodbarrow Lagoon and Haverigg Haws. With Natterjack Toads among the estuar’s most famous natural inhabitants, it’s estimated that the estuary hosts around a fifth of the species’ national population. It’s also a popular spot for birdwatchers, with sightings of Redshanks, Oystercatchers, Dunlins and Curlews providing regular delight.

One of four coastal stations north of the Copeland border, Harrington is a quiet harbour town with a combination of pleasant walks and stunning views.

Like many other coastal stop-off points, Workington dates back to Roman times, with forts protecting the coast from unwanted ‘visitors’ from Scotland and Ireland. An ideal place to begin a cycle ride from, Workington is on the ‘Sea to Sea Cycle Route’ endorsed by Sustrans, winding through the Lake District and Pennines.

Flimby is perfect for enjoying beautiful views across the Solway Estuary up to Scotland, with more secrets of the Roman age waiting to be discovered. 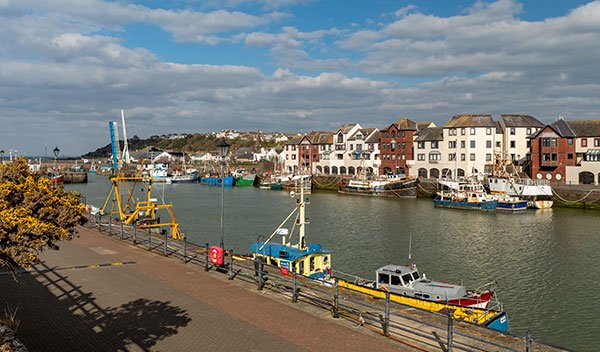 This bustling harbour town features the Lake District Coast Aquarium, and the Roman Senhouse Museum, looming above the clifftops. It’s also a great location for a Roman themed ramble, starting at the Maryport Maritime Museum. Taking in spectacular views of the Solway Firth, this 3 mile route meanders into the Solway Coast’s Area of Outstanding Natural Beauty. From here, the coastal railway route veers inland, taking in further stops en-route to Carlisle. For those arriving by car, changes have been made to parking plans at the harbour, which include a mix of pay to park, short term and long term free parking adjacent to the aquarium.

The most up-to-date information for current rail and bus timetables is below:
Avanti West Coast (For Oxenholme The Lake District, Penrith North Lakes and Carlisle)
Northern Rail (for Morecambe Bay and Cumbrian Coast routes)
Stagecoach