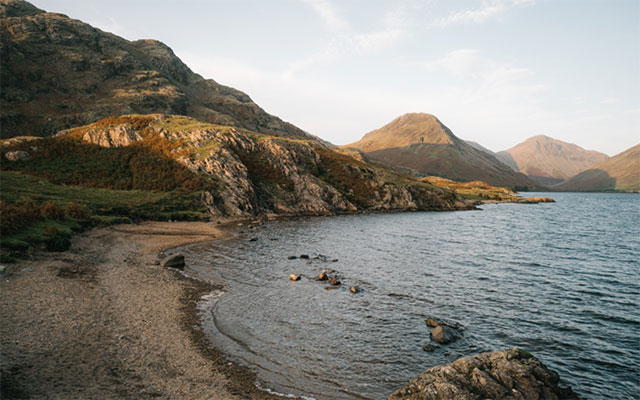 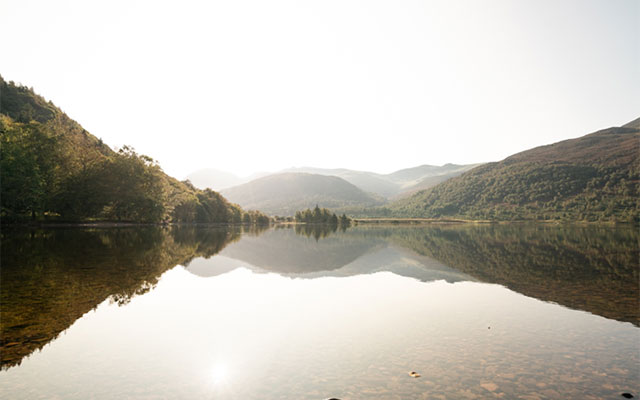 2021 is Cumbria’s Year of the Coast. In late summer of 2020 Cornwall based photographer Sam Scales spent 9 days travelling through Copeland as part of a shoot to capture the beauty of the Lake District Coast. His body of photographs, which were commissioned as part of the Deep Time arts programme, provide a stunning showcase of this lesser-known part of the National Park, from its ancient standing stones to the post -industrial landscapes of Whitehaven.

Scales began his trip at the Duddon estuary in the south, making his way north, dipping inland to visit the 4 valleys of the Lake District situated in Copeland, including Ennerdale, and Wastwater, England’s deepest lake and home of Scafell Pike, England’s tallest mountain.

From the top of Corney Fell, I looked down on the Duddon estuary shimmering in the morning haze. The wind was high and cloud shadows drifted across the top of the pass, providing patches of sunny warmth for the sheep wandering across the road. To the West the Irish sea was visible, as it hugged the coast, separated from the land by an olive-green strip of verdant grassland. I had heard from locals that this 60 or so kilometres of coast had some hidden gems, from quiet watery inlets to the windswept dunes of Drigg, but that one needed a bird’s eye view to observe its full sweep. Corney Fell provided just that. This mountain pass connecting Ravenglass and Duddon Bridge rises 398 metres above sea level, and from its top it is possible to see the Isle of Man, North Wales and parts of Scotland, unless enveloped by cloud, in which case it can be hard to see much at all. 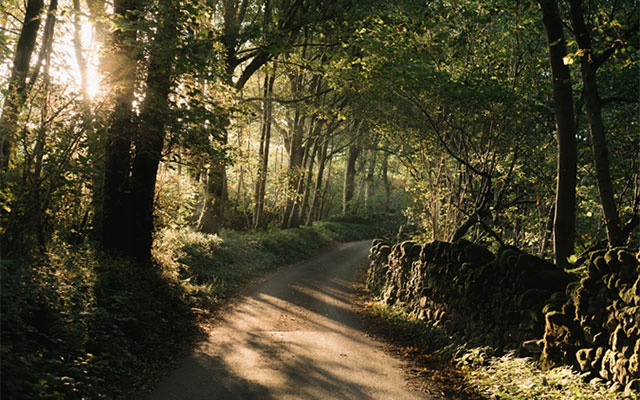 I arrived in Cumbria on a Monday in mid-September, after a lot of change in the world brought about by Covid, and lockdown, and the shoot provided an appealing opportunity to return to the landscape, and enjoy a sense of freedom and adventure for which I was grateful.

As a photographer, I always plan my trips in advance, mapping out an itinerary with provides a structure from which I can exercise some flexibility when out in the field. I had already worked out the position of the sun at sunrise and sunset and could see that at this time of year, it was best to be inland at sunrise and to explore the coast at sunset.

After a long drive from the South West my first stop was Mitredale Forest for a few hours of forest bathing with Stuart Lockton from The Expedition Club. Located at Eskdale Green, forest bathing or ‘Shinrin-Yoku’ involves connecting with nature by focusing on the smallest details of a forest, from the smell of moist lichen to the feel of a branch in one’s hands. Calming stuff! 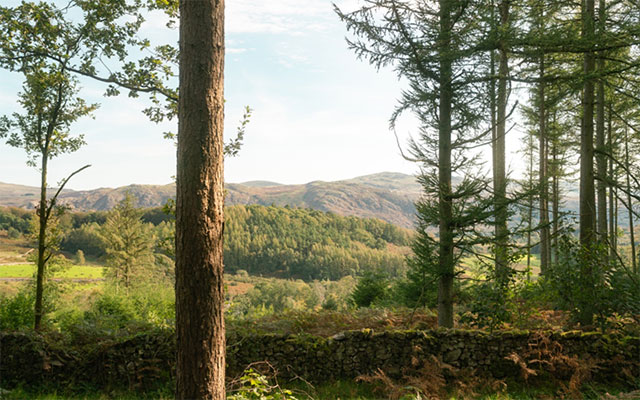 After soaking up nature I made my way back towards the coast and Drigg Dunes, over 1000 acres of protected grasslands, where I planned to shoot until sunset. It is hard not to be taken aback by the vastness of Drigg’s dunes, a lunar dunescape criss-crossed with desire lines. A calm, warm evening with almost no breeze, one could imagine how different this location can be when exposed to different weather and why it is such a haven for the many protected species which call it home. 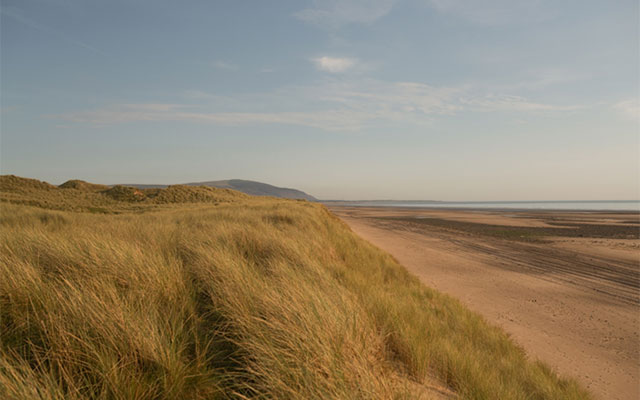 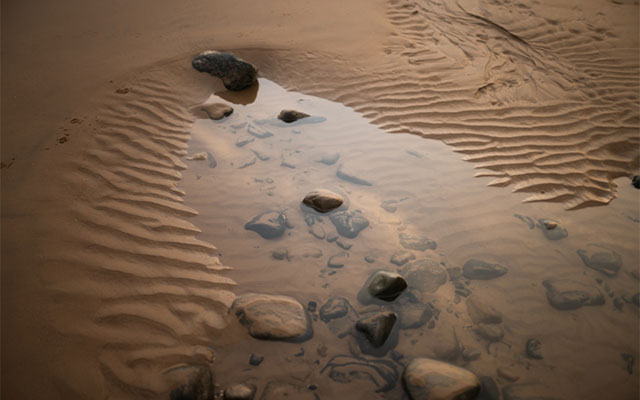 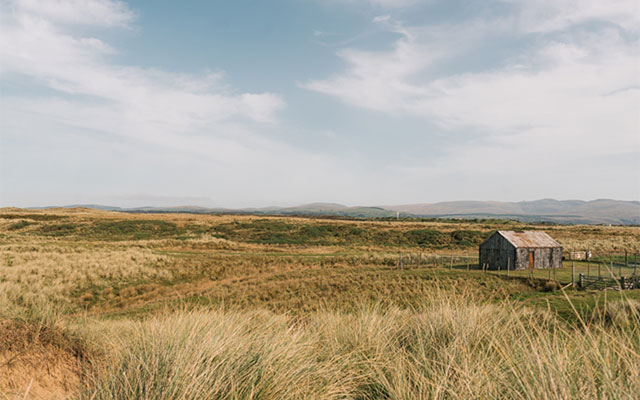 The following day I set out on my first hike leaving my hotel at 5.30 am for Ennerdale, knowing sunrise would be at 6.45am. I walked steadily around the lake as the sun started to rise in the distance. At points it was necessary to chase the light in order to get the right composition, and I found myself continually thinking about what the light and scene might look around the next corner or inlet. After 2 hours the sun was high enough over the peaks to cast a golden light over the lake and provide the right conditions for the perfect shot. 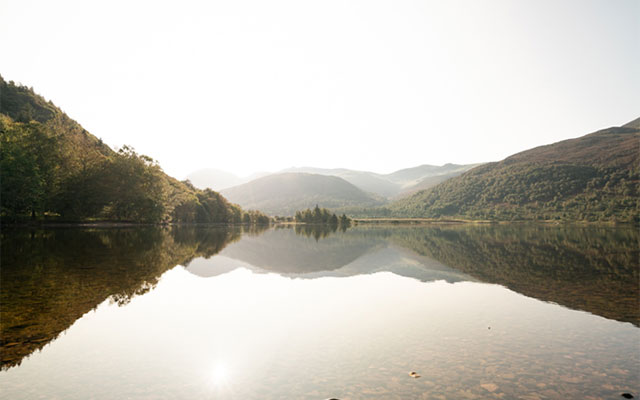 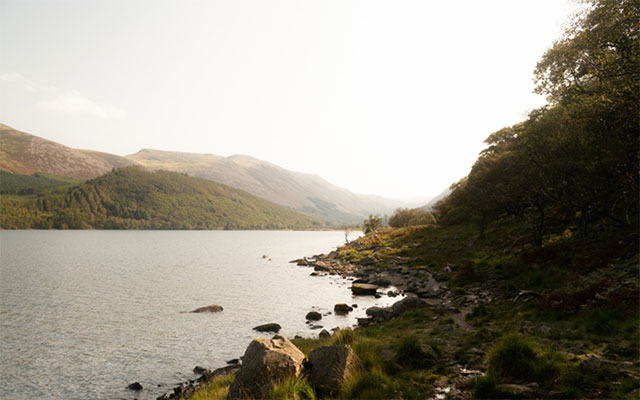 Copeland’s coast is varied, and the balance between the coast and lakes is interesting, particularly the routes inland from lake to sea, which have some intriguing sights. One such site is the Swinside Circle, a circle of 51 stones from the Neolithic age this monument is made of local metamorphic stone and is located near to the excellent Broadgate House, a bed and breakfast run by Diana Lewthwaite, which has wonderful gardens which afford visitors with a spectacular views over the Duddon estuary.

The next few days consisted of similar sunrise trips to make use of the morning light including Black Combe, which at 1970ft (600m), falls 30 ft short of being a mountain but is a dynamic and imposing presence in the south of the borough, particularly when viewed from the coast. The views from black come summit of its surrounding Lake’s and fells are superb and if you visit you need a good half day.

Located near Black Combe is Haverigg, a sandy beach located opposite side of the estuary to Barrow in Furness and home to what local people call ‘the hollow’, a flooded iron ore mine with a circular sea wall. This much-loved site is home to an RSPB nature reserve and is peppered with scheduled ancient monuments and has spectacular views out to sea. 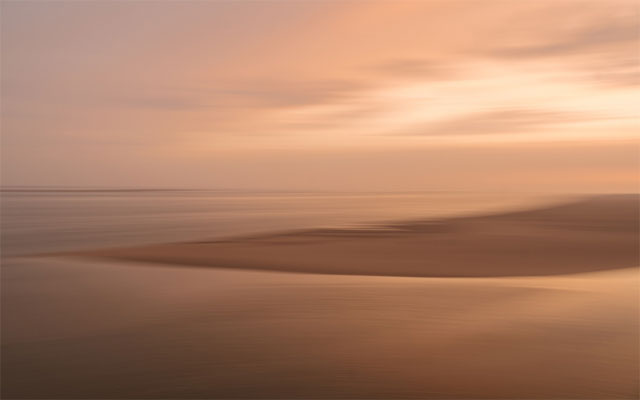 From Haverigg I headed north along the coast, darting inland through Waberthwaite, home to the 800 year old St John church, which is situated on the tidal River Esk, beneath the wooded slopes of Muncaster Fell which is a quiet place where the sounds of the river and bird life are permeated only by the sound of the villages resident donkey. Leaving Waberthwaite I passed the wonderful shop front of Richard Woodall, a family run firm founded in 1828 which was famed for its Cumberland Sausage (Copeland used to be called Cumberland I learnt), and which used to supply the royal household with sausage, hams, and bacon along with Fortnum & Mason, Harrods and Selfridges. 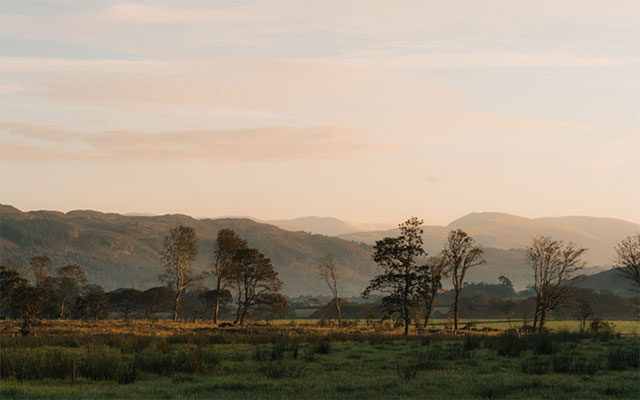 Heading north from Waberthwaite one arrives at Muncaster valley, a beautiful watery basin which is overlooked by craggy hills with hill top beacons looking down on you. As you cross the river the imposing Muncaster castle appears nestled into the hillside, home to the Pennington Family for over 800 years, and with incredible views north towards Scafell Pike.

Over the course of the following few days I passed through the towns of Eskdale, and half way along the coast, Seascale, and the Sellafield plant, which is an imposing image on the coast, and is approaching a heritage site, given its establishment in the late 1940’s. This is a piece of British industrial heritage, that I was keen to see, following in the footsteps of famed British photographer Maurice Broomfield who documented the rebirth of British industry in the post war era and who photographed Sellafield’s cooling towers under construction in 1954. There is a strong link between Sellafield and Wastwater which supplies water to the plant and I headed inland to the this deepest of lakes, with its grey volcano like surround, one of the most memorable sites during my trip, with a sublime quiet beauty.

North of Sellafield the coast stretches on, where one can find the beaches and headlands of St Bees and Fleswick Bay which is famous for its shipwrecks with rusting engine gear that nestle into the beach and remind us of the coasts seafaring history. This is certainly most pronounced in Whitehaven, my final stop, a town with a history and incredible Georgian architecture which the council is slowly reviving, including a brilliantly yellow stucco building that tells of the town’s wealthy past. Whitehaven marina looks like it has been honed from the mountain with eroded stone in a verity of colours that tells a story of the areas mineral landscape. 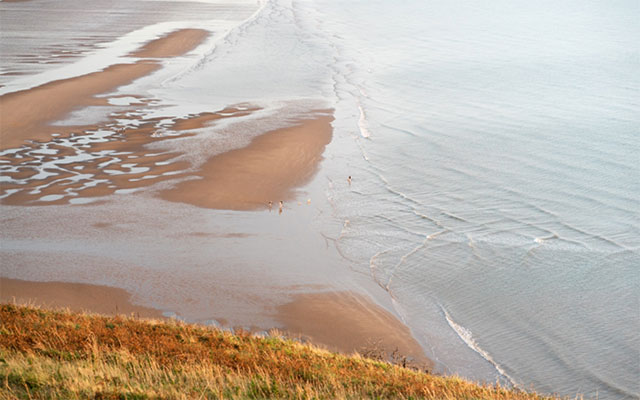 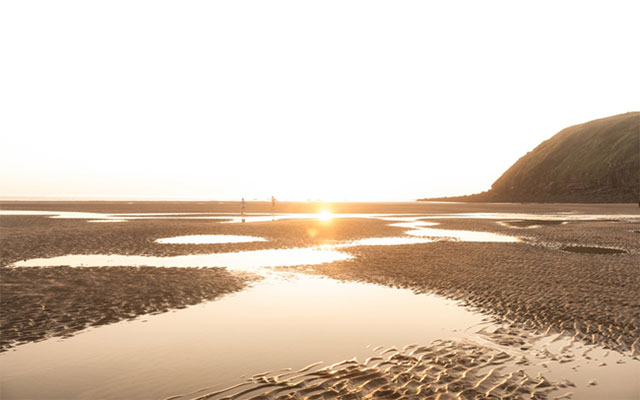 Copeland is a really unique place with beaches that stretch for miles, meandering leafy lanes and roads that snake in and out of the landscape, and often up over it following the lines of dry-stone walls that sometimes appear to defy gravity. It is a place of slowness and realness, that during my week there I felt I began to really know.