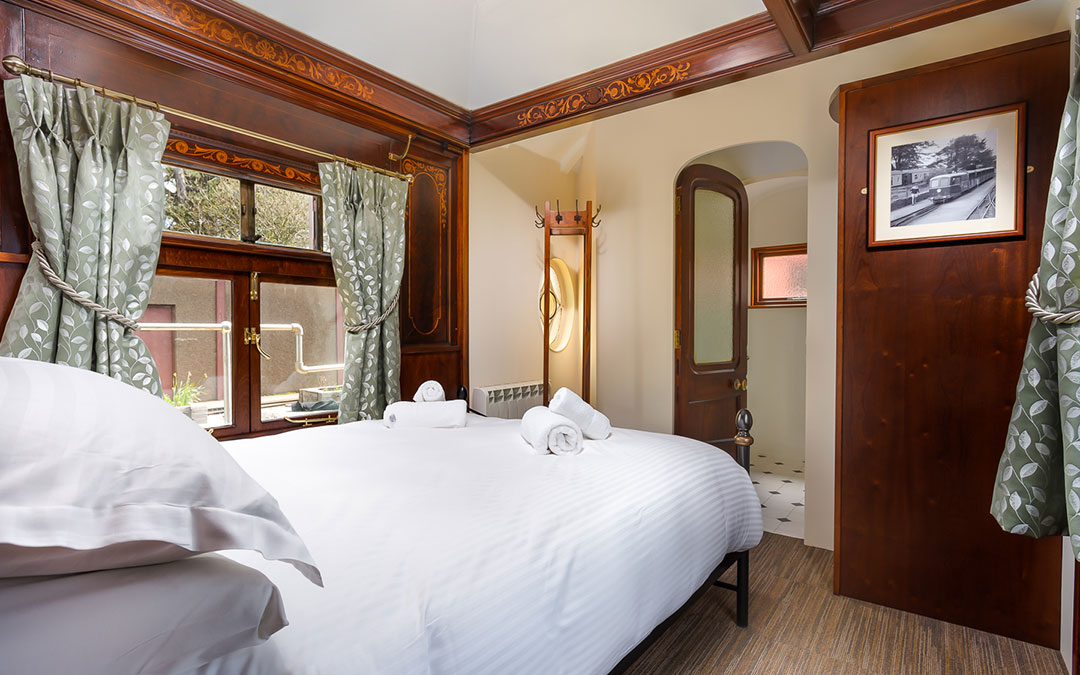 Ravenglass in the Western Lake District is home to some new quirky ‘railway holiday’ accommodation, following the remarkable transformation of two near derelict Pullman Camping Coaches dating back more than a century.

Originally built in 1917 as part of a World War One Ambulance Train, ‘Elmira’ and ‘Maid of Kent’  are the UK’s oldest Railway ‘Camping Coaches’ still in their original location – uniquely situated at Ravenglass in a coastal setting within two UNESCO World Heritage Sites: The Lake District National Park and Hadrian’s Wall (Frontiers of the Roman Empire). 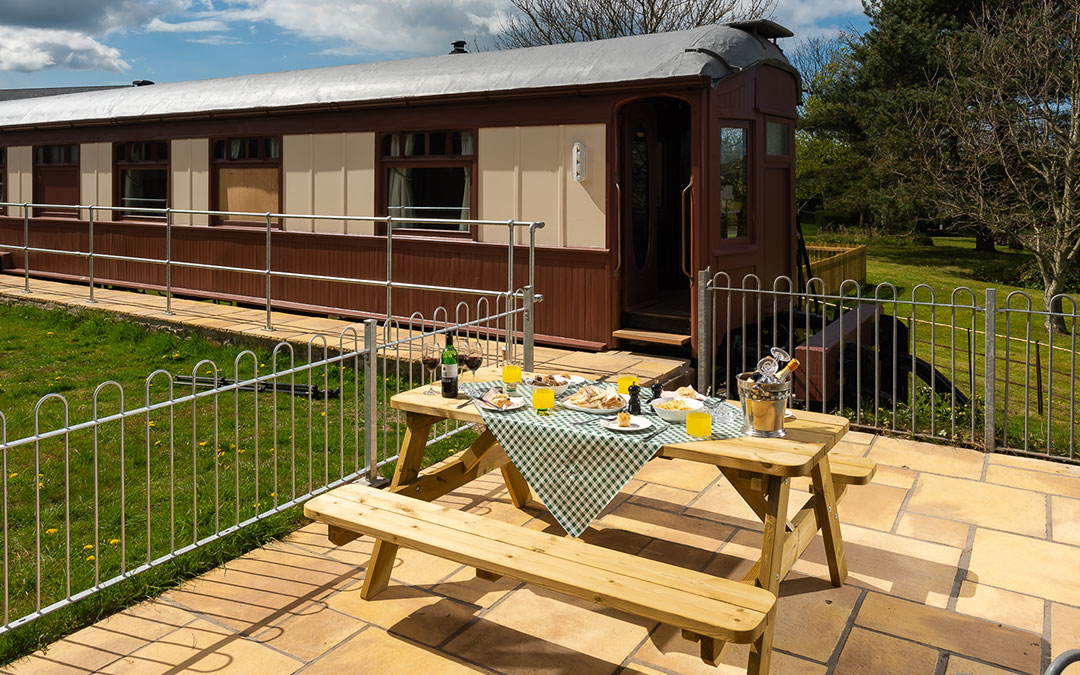 Using £250,000 from The National Lottery Heritage Fund and a private investment of £85,000, the innovative transformation of these two historically important vehicles into striking new visitor accommodation for up to 6 persons has painstakingly preserved many of the carriages’ original highly-crafted features.

As well as being easily accessible for the Cumbrian Coastal Way, the location sits alongside one of the UK’s best-known heritage railway lines – Ravenglass and Eskdale Railway – and links in with the main rail network, opening up new possibilities for fully sustainable travel experiences where people can leave the car at home.

As the roadmap out of lockdown progresses, the coaches will also be opened up at selected times for pre-booked, socially distanced visits – giving people a new perspective into their unique heritage and helping to share stories and memories of the so-called ‘Carriages off the Rails’. 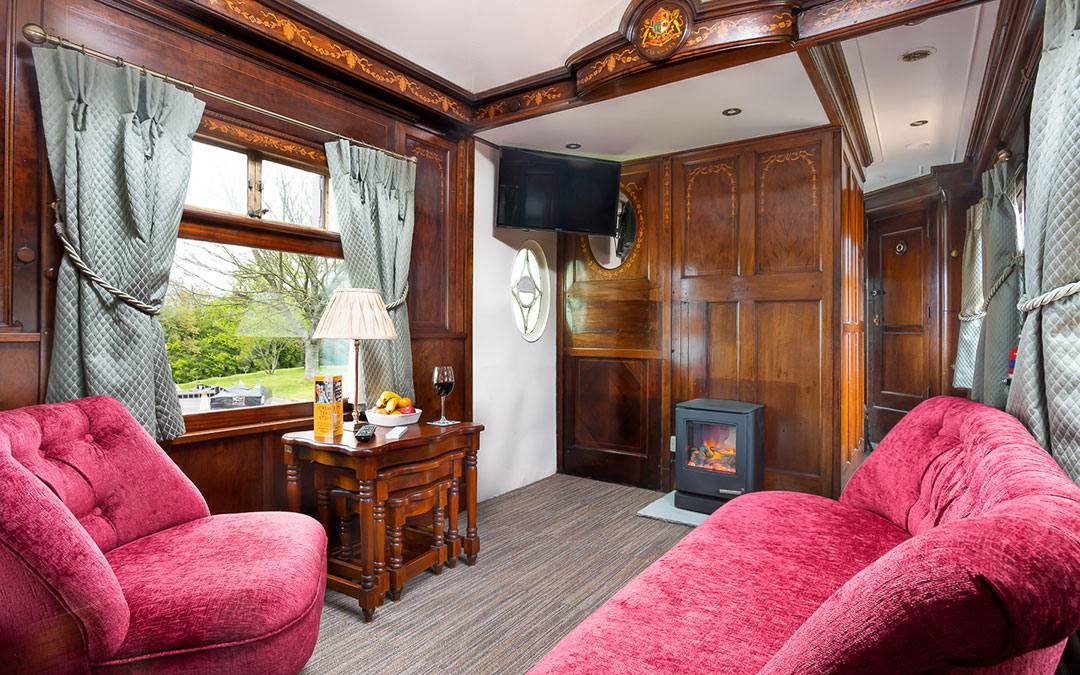 Rachel Bell, from Ravenglass & Eskdale Railway, says, “Bringing these nationally significant Camping Coaches back to life has been a real labour of love and it is fantastic to be giving staying visitors the chance to soak in their rich heritage for the first time in many, many decades.

“We think it’s a fantastic way of reinvigorating a unique slice of railway history and raising awareness of the Western Lake District and the lesser-known Lake District coast to a new generation of staycationers who want to travel in a more eco-friendly way and enjoy authentic family experiences.”

David Renwick, Director, North at The National Lottery Heritage Fund, adds: “Investing in heritage means investing in the community it belongs to, which is why we are delighted to support this project. Thanks to money raised by National Lottery players, more people will be able to enjoy the rich heritage of these Pullman Camping Coaches. Attracting visitors from further afield to explore the stunning landscape using this quirky accommodation as their base will also play a role in boosting the local economy.”

Dawn McGough, Community Rail Manager for Community Rail Cumbria, comments: “I am so pleased and excited by the prospect of these two wonderful Pullman coaches being restored to their former glory. In the mid-1930s, this new ground-breaking concept took off on Britain’s railways as a unique way of staying in remote picturesque locations accessible by the train.  By bringing back to life the two camping coaches at the Ravenglass and Eskdale Railway, guests will not only have fantastic accommodation but also be on the doorstep of one of the most beautiful parts of the Lakes.

“My challenge to all the people and families who stay in the coaches is to plan their holiday using only the railway and leave the car at home. There are a host of attractions and interesting places to visit along the Cumbrian coast railway, very easily accessible from stations along the route, and much quieter than the tourist hotspots in the heart of the Lake District.”

The renovation of the Pullman Camping Coaches has been made possible with £250,000 from the National Lottery Heritage Fund. It was awarded to a partnership between a charity – the Ravenglass Railway Museum Trust – and the commercially-run Ravenglass & Eskdale Railway with a private investment of £85,000.

Online bookings are now available for both ‘Elmira’ and ‘Maid of Kent.

The story of the ‘Carriages off the Rails’ dates back to after World War I where they were used as ‘homes for heroes’. Some became animal shelters and barns, while other redundant carriages in attractive locations – often coastal – were turned into affordable holiday accommodation linked to the railways in the 1930s. During World War II, many were pressed into the war effort.

By 1958, they saw a revival as British Railways were able to offer ‘delightful inexpensive holidays’ in more than 130 locations. Branch line closures following the Beeching Report, combined with cheaper overseas travel in the 1970s meant many of the carriages did not survive.